It is said that children who get lost in the city on a rainy day end up devoured by the sirains. The only way to escape those starving creatures is to find other lost kids and stay close to them at all times.

It is also said that the sirains always find a way to seep into the most closely knit groups. By using evil thoughts, fear, hunger and loneliness, they lure their victims and snatch them, one by one, to devour them in the dark. In the end, only one lost child will find his way home.

The others will never be seen again.

If we stay together, nothing can harm us… I hope…

Lost in the rain is a short roleplaying game of sadness and horror which invites you to take on the role of a child, lost in the great city and hunted by mysterious creatures.

Those who have never played a RPG before might find this game a bit hard to begin with, but know that it gets more accessible after only one turn. Sharing the narration of the « story » allows players to help one another; plus, the short duration of each game makes it perfect for initiations (one hour and a half is the ideal duration). Furthermore, you don’t need any special equipment, funny dice, figures, etc. A few tokens (marbles, stones, paper clips, whatever), some pens and paper, and you’re good to go! Finally, there is no GameMaster: knowing the rules is sufficient to play, and no one has to spend hours preparing an adventure.

For those who have already played « more traditional » RPGs (with a pre-written scenario and a GameMaster to decide where to go), Lost in the Rain might also be a bit upsetting. No central facilitator here, no scenario, each player is responsible for his own lost child but also for the story. That doesn’t mean no one is in charge though. When your chapter comes, your character is put in front of the scene and opposed to the avercity, which consists in fact of all the other players; they are in charge of the world that surrounds you and of the terrifying sirains trying to devour you, but also of your perceptions and your evil thoughts. They are the group of children that rejects you. At the end of a chapter, another player’s character is put in front and you join the advercity, ready to take revenge upon this new victim. Unless you’d prefer to sacrifice yourself for him? In that case, you’ll soon discover that children are not always as grateful as you might think…

As a horror game, Lost in the Rain also takes advantage of its « collective narrator ». Any player can use elements introduced by others, add new details to them, bounce back on others’ ideas or just let them talk while focusing on their own character. One of the scariest parts of the game is when you see one of your creations used against you by someone else, like some Frankenstein’s monster breaking loose from its creator. Brrr…

If you want to purchase Lost in the Rain, the easiest way to do this is to go to its Amazon webpage (the game was conceived and edited through the CreateSpace print-on-demand platform).

Kate Bullock has given me the wonderful gift of a very developed review.

Those who would like to ask me about my game can go to the cottage I have in the Ateliers Imaginaires forum. If you read French, you will discover there some great French indie RPG creators. The forum has been closed, but the archives remain.

Needed material: 10 tokens per player, some pens and paper 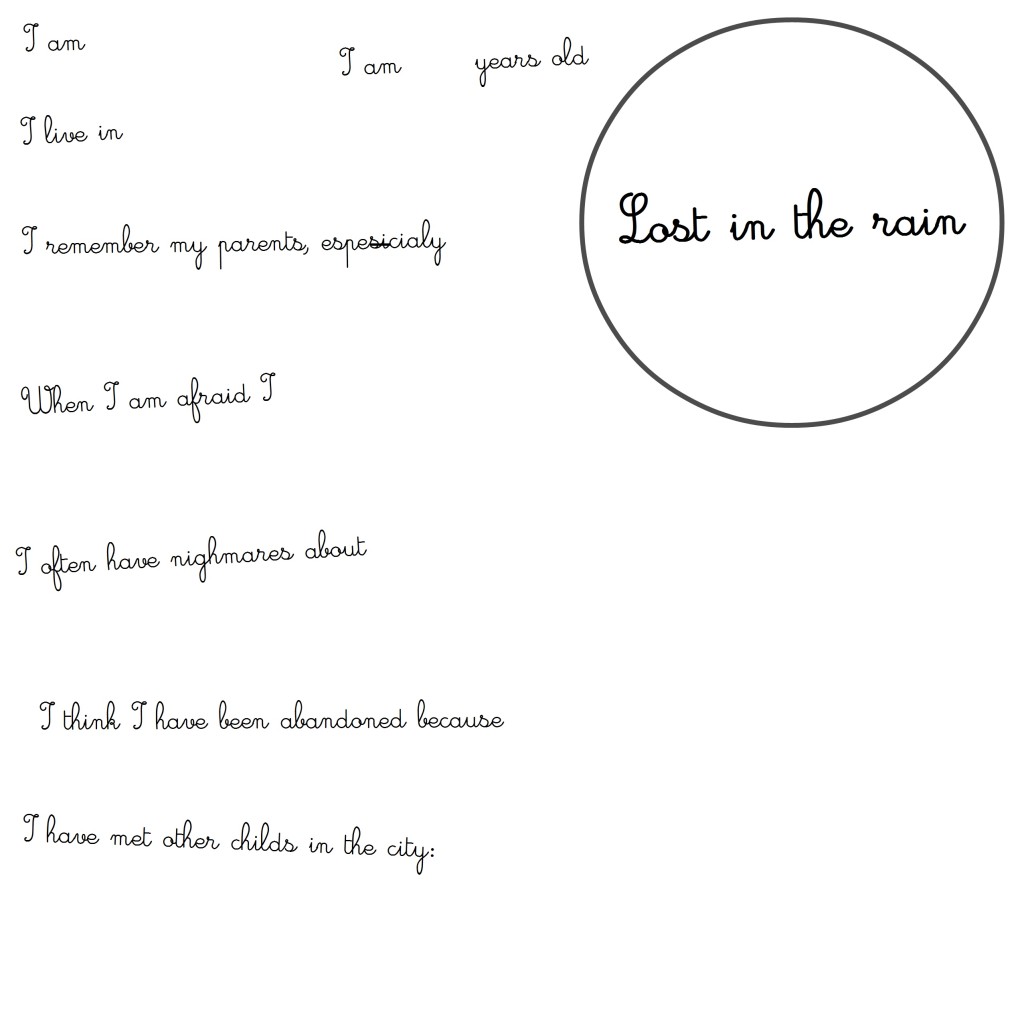 Lost in the Rain Character Sheet