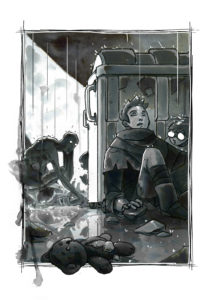 As you’ve learned in Lost in the Rain, children who get lost invariably end up in the Wetlands, sinister ghost of a City where the rain never stops and gives birth to the terrible sirains, voracious monsters eager for children’s flesh. Many innocents end up taken away by malicious, shape-shifting monsters, and only a few manage to find the way home…

And there are the others, those who survive without ever finding the way out. After many days, they finally arrive at the cloud fortress, a miraculous place spared by the monsters and the waters of the sky: Libreté, the last refuge, built by lost children on the remnants of the grown-up world. Within its walls, countless refugees are trying to maintain an entire society, imitating the « paradise » they left behind.

Alas, each new group brings in its wake its own pack of predators, and sirains slowly, irremediably gather around the fortress, waiting for the day when they will be numerous enough to attack Libreté itself in one final assault. Inside the walls, oblivious children tear themselves apart instead of protecting their realm from the real enemy.

As a roleplaying game, Libreté invites you to take the role of a child of the fortress. You can be a newcomer or one of the first inhabitants, a nobody or a leader, the member of a well-established gang or an independent trying to play their cards right in the great diplomatic game. Sometimes you would like a grown-up person to take reigns and let you be a child again, but grown-ups are gone, and their responsibilities are now yours; no one will come to make that decision for you, and you must live to the end with the consequences of your actions.

The game can be labelled « powered by the Apocalypse », in tribute to Vincent and Meguey Baker’s Apocalypse World, a role-playing game that has offered a new current to our hobby. In addition to the principle of using archetypes to quickly characterize a character, the game mechanics are intended to avoid unnecessary tests and bring new twists to the game story. Most systems based on this model also offer an excellent balance between active participation from each player and the pleasure of exploring an independant universe staged by a Master of Ceremony or a Gamemaster (here called the Advercity).

To these aspects, Libreté adds some ideas of its own, and notably the « Black Bile » system, mechanics whose purpose is to symbolize the suffering that pervades each lost child and pushes him towards acts that they will doubtlessly regret; if they can use this bile to better overcome obstacles, they also risk going too far, succeeding beyond their wildest expectations and hurting people around them. Note that players are directly responsible for the management of this resource, making it a great tool to help players understand their own character and communicate about them.

The final book will also contain a very simple system for creating your own fortress through a series of questions. Those who do not like this kind of exercise can rest assured: at least one pre-built fortress named Fleurs du Mall is also planed, which will follow the scenario of the demo kit and help satisfy those who would like to continue the adventure with the same characters.

The game has entirely been funded in French in 2017; at the time being, only the demo kit has been translated in English (you can download it for free in the link section), and we are still searching for an English-speaking editor or any opportunity to go beyond. Do not hesitate to contact us at this address: v.feasson at gmail.com.

The Cloud Fortress, the Demo Kit for Libreté in English, computer screen version.

The Cloud Fortress, the Demo Kit for Libreté in English, printable version.

A notice to assemble the printable version, in French and English.

The Drivethru page of the French game.

The French page of the game.